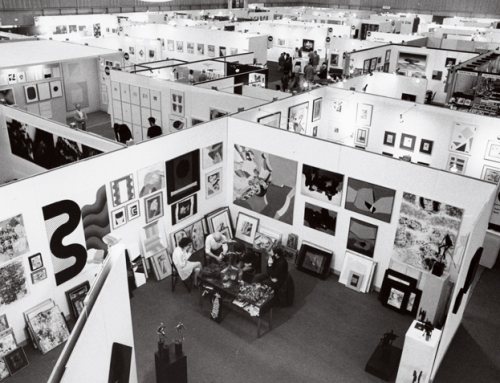 Clément Dirié: This year, you would have celebrated your 44th participation in Art Basel, which was founded in 1970. What were you doing back then?

Massimo Minini: I was born in 1944, so I was 26 years old in 1970 when I moved back to Brescia, having spent some years in Milan. I started to work with a friend of my father’s as a sales rep in an import-export business. I had a driver’s license and was multilingual, so I drove through Europe selling goods. I already had an interest in art: From 8am to 4pm I did my job, and from 4pm on I visited museums and galleries, met artists and collectors, and I discovered there was an art world out there, working and showing and selling things. At this point, I was yet to think about opening a gallery.

I first became interested in art while in Milan as a student. Skipping my law lectures, I visited galleries instead. It was a fantastic time for the city’s art scene, one could visit the Galleria del Naviglio, and the Galleria Blu, and meet great dealers such as Arturo Schwarz and Ettore Gian Ferrari. I was not at all familiar with contemporary art. Back then you would study art history up until the 19th century, and if you wanted to know something about the 20th century, it was up to you. In college, you would learn very little about Pablo Picasso or Georges Braque. Futurism, which was so important in Italy, wasn't even mentioned!

CD: Did you buy works in Milan or when you were traveling through Europe?

MM: I didn’t have any money to collect and I didn’t want to be an artist either. An artist’s life was too difficult, and you really need to have something to tell the world. Only now would I like to be an artist; maybe I have started to understand something in the end… To come back to the early 1970s, I soon quit my job and worked for two years with Giancarlo Politi at Flash Art, the Italian magazine he founded in 1967. This was an exciting time to work with him. American Conceptual art was unfurling in Europe, especially in the 1972 editions of documenta in Kassel and the Venice Biennale. We went to both cities – with small suitcases and t-shirts with the magazine’s logo – to sell the magazine and I met lots of people. After this experience I needed to do something different, so it was logical for me to open my own gallery.

CD: Why did you choose to open it in Brescia?

MM: I opened my first gallery named Galleria Banco with a friend. I had the name and he had a space, which was in Brescia. I could not afford to pay rent. For the first two years I didn’t even have a phone. I would sit in the gallery and wait for someone to come in. Notes were sent by snail mail. We had to announce visits a month in advance: 'Mr. Minini will come to see you in Rotterdam on May 23, 1974.' One day, a guy from the bar next door came to me. He told me someone was waiting for me on the his phone. It was a collector from Genoa who had looked for the nearest bar on my street in the phone directory in order to contact me. I answered the  call and he bought a photographic work by the fantastic Italian artist Michele Zaza. Quite different from today’s business!

View at Art Basel
Back To Top