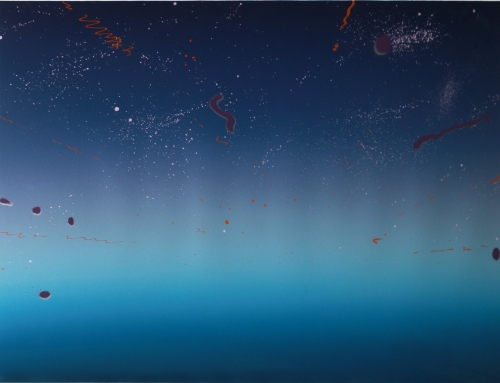 Born in Los Angeles in 1939, Alexander initially studied under Louis Kahn at the University of Pennsylvania from 1957 to 1960, intending to become an architect. Following a stint at the Architectural Association in London, he matriculated at the University of California, Berkeley, then attended the University of Southern California, and eventually landed in the art department of the University of California, Los Angeles (UCLA), where he studied with Richard Diebenkorn. He continued his art studies at UCLA, during which time he began his resin sculptures, and graduated from its MFA program in 1968. These works began as line drawings and took the form of Plexiglas boxes before Alexander discovered the potential of resin, which can mimic the shape and volume of water, as in the foundational Cloud Box, 1966.

By the 1970s, Alexander had begun making his black velvet paintings, for which he further deployed found materials, including rhinestones, taffeta, velvet, and corduroy. His early preoccupation with light remained. Of Alexander’s 1992 acrylic paintings, which are based on photographs he took of the Los Angeles riots as portrayed on his television, Alex Kitnick wrote in Artforum in 2015: “In a strange, almost perverse fashion, the paintings evidence a continued interest in Light and Space’s primary preoccupations—atmosphere and architecture—albeit with a notably different spin. Light here is no longer associated with sun, but with heat and fire.”