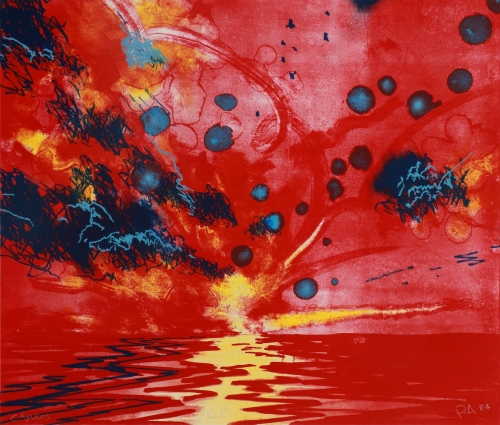 Pick of the Week: Peter Alexander

It’s not that difficult to be contemporary. Be it through art, or writing, or simply conversation, we’re almost always discussing what’s right in front of us. It’s another thing all together to create something which takes on an entirely new meaning decades after fabrication. This is the power of Peter Alexander’s exhibition “Light in Place,” on view now at the Cirrus Gallery.

This survey of Alexander’s works – mostly lithographs and paintings, created in the 1970s, 80s, and 90s – illustrates some of the finer physical qualities of light. Alexander uses a wide variety of materials like velvet, glitter, and Kromekote paper to transform not only the light within the painting but the light of the space itself into a tactile experience. His older paintings, such as The Other One and Huh?, are especially engaged with this physicalizing work.

From the 1980s onwards, Alexander’s work becomes almost entirely lithographic as his pursuit of understanding and capturing light becomes more direct. Alexander himself is quoted as being inspired by the nature of Los Angeles and Southern California in particular. There are a wide variety of subjects: stunning bursts of light and color, monochromatic storm clouds breaking over the ocean, and cityscapes viewed from high above.

But what exists throughout all of Alexander’s works is a deep sense of unease. The vibrant sunsets appear as violent and chaotic explosions. The tilted cityscapes feel unbalanced and restless. The storm clouds, though breaking, are dark and threatening. Overall, Alexander’s vision of the beautiful vistas which inspired him are frightening, almost dystopic.

I wondered in my unease whether this feeling was coming from the art or from our current era. The sunsets reminded me of the images of the wildfires that were blanketing California in smoke. The lights of a city at night reminded me of the on-going protests for human rights and justice in Los Angeles. The work was pertinent to right now, and while that pertinence disquieted me, it is a testament to Alexander’s ability as an artist to be strike that mark from thirty years in the past.